On a nectar trail through the drylands 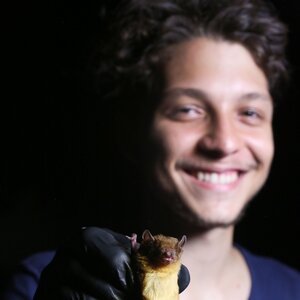 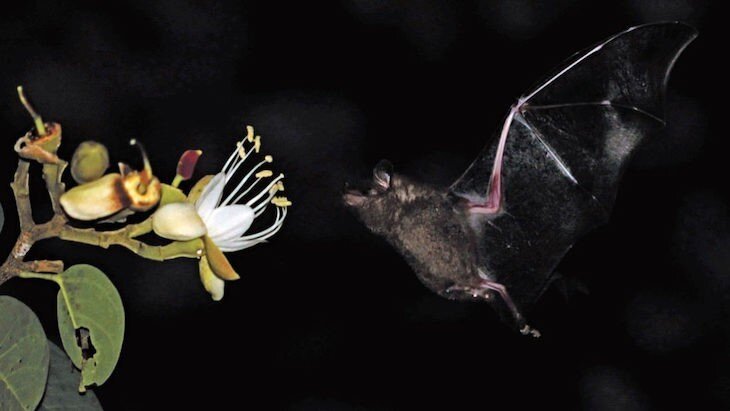 The discoveries on how bats perceive and interact with flowers in the Brazilian Caatinga.

Cover photo credit: Athur Domingos-Melo. The flowers of the Caatinga species Hymenaea cangaceira produce so much nectar to attract and reward bats that it ends up spilling onto the ground, a phenomenon coined as “sweet rain”.

In the dry hinterlands of northeastern Brazil lies the Caatinga, the largest Tropical Dry Forest of South America. An often forgotten natural treasure, it is not only highly biodiverse but also a global hotspot of bat-pollinated plants. Researchers are uncovering a series adaptation of flowers to the demands imposed by nectar bats, which often involve unexpected and curious strategies developed to attract and interact with these swift and elusive animals.

When thinking of Brazilian nature, the image of the lush Amazon with its thickets of evergreen forests promptly stands out in our minds. Or perhaps the Atlantic Rainforest bordering the glittering beaches with welcoming warm water along the eastern coast. After all, these are true Brazilian natural heritages that harbor the country’s most thrilling biodiversity, right? To a certain extent, yes, but most people would be surprised to realize that the only ecosystem that is entirely confined to Brazilian territory is seemingly barren most of the year. When venturing for the first time through the Caatinga drylands in northeastern Brazil during the first months of the year, it wouldn’t be an uncommon reaction to point out that just beside the coasts covered in eye-dazzling rainforest lies a place so colorless. Under the oppressing sunlight, the leafless trees, thorny bromeliads, and an incredibly dry breeze seem unwelcoming at first. However, the crooked branches and thorny patterns that cover the land hide an unexpected richness of tropical animals and plants, all of which armed with an arsenal of adaptations to pull through the long yearly journey of a seven to nine month drought. While the highly-anticipated rain doesn’t come, going for a walk in the Caatinga at night may yield a surprise: it rains sugary water from above, and there are nightly dwellers that are most pleased by it.

No, it is no thirst-induced hallucination, but rather a curious biological phenomenon called “sweet rain” [1]. During the dry season, trees from the species Hymenaea cangaceira produce so much nectar from their flowers that it overflows and drips down when the plants are struck by a weak breeze. Such large amounts of nectar are perfect for attracting warm-blooded, large pollinators: bats. Nectar bats swarm these trees to consume such abundant resources while delivering a high-quality pollination service. In fact, researchers believe that the risky business of dripping away so much water and sugar in such a harsh environment is worth the deal if it is to catch the attention and trust of nectar bats, which have one of the highest energy demands among pollinators, but that, in turn, carry pollen over long distances like no other. 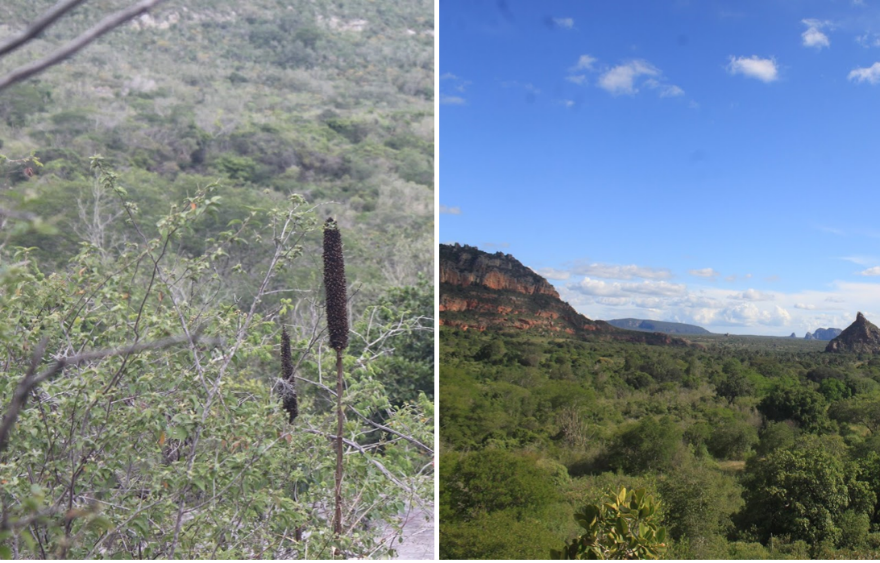 The shrubby vegetation of the Caatinga is usually dry and loses most of its leaves due to the prolonged dry period. The biome quickly turns verdant and colorful during the mid-year rains. Credit: Ugo M. Diniz.

The phenomenon has been observed in few other species, but H. cangaceira is remarkable for the copious amounts of nectar produced in a single tree by one night – up to liters and liters! And the species has even another strategy up in its sleeve. The dripping nectar is fragrant, exuding a fermented, musty odor that serves as a long-distance cue to attract flower-visiting bats [1]. Allied to the sweet rain, one could say that the plant creates an “attraction field” around itself made of scent.

The case of Hymenaea cangaceira is just one of several examples of curious strategies seen in bat-pollinated plants from the Caatinga. The Brazilian biome has one of the highest proportions of bat-pollinated species in the world; about 13% of the plant species in it have evolved to attract and to depend on bats for pollination [2]. These plants are largely represented by cacti, a family of plants with a close evolutionary relationship with bats, alongside agaves and leguminous species. They feed at least five of the 16 species of nectar bats that occur in Brazil, including endemic and highly specialized nectar-feeding bats from the genera Xeronycteris & Lonchophylla [3]. Among several research teams, the Floral and Reproductive Biology Lab (POLINIZAR) from the Federal University of Pernambuco has been giving special attention to this system. Our group is uncovering the peculiarities of bat-pollinated systems and trying to trace the evolutionary background behind them.

Aside from the “sweet rain” phenomenon, one of our latest insights is about the habit and architecture of chiropterophilous (bat-pollinated) plants. In a recent paper, we highlight how rare terrestrial bat-pollinated herbs are, compared to the majority which are trees, shrubs, or epiphytes. Additionally, chiropterophilous plants generally have a distinguishing architecture: flowers are often located on long and lean stalks, positioned well above the ground vegetation or the canopy, a floral organization known as “styliflory” [4]. We then speculated that floral height should have some role in the interaction with bats and that it could be explained by the assumption that bats are both large pollinators that require physical space for wing beat, and echolocating animals that require a clutter-free acoustic space to detect flowers [5, 6]. If bats needed better accessibility to flowers in comparison to other pollinators, that would explain why most bat-pollinated plants are found more frequently on open areas with sparse vegetation, such as deserts, semi-arid habitats or forest borders. Forests have just too many obstacles. However, everywhere we looked in the Caatinga, we saw those flowers atop the long stalks above the shrubby groves or on the towering branches of columnar cacti. 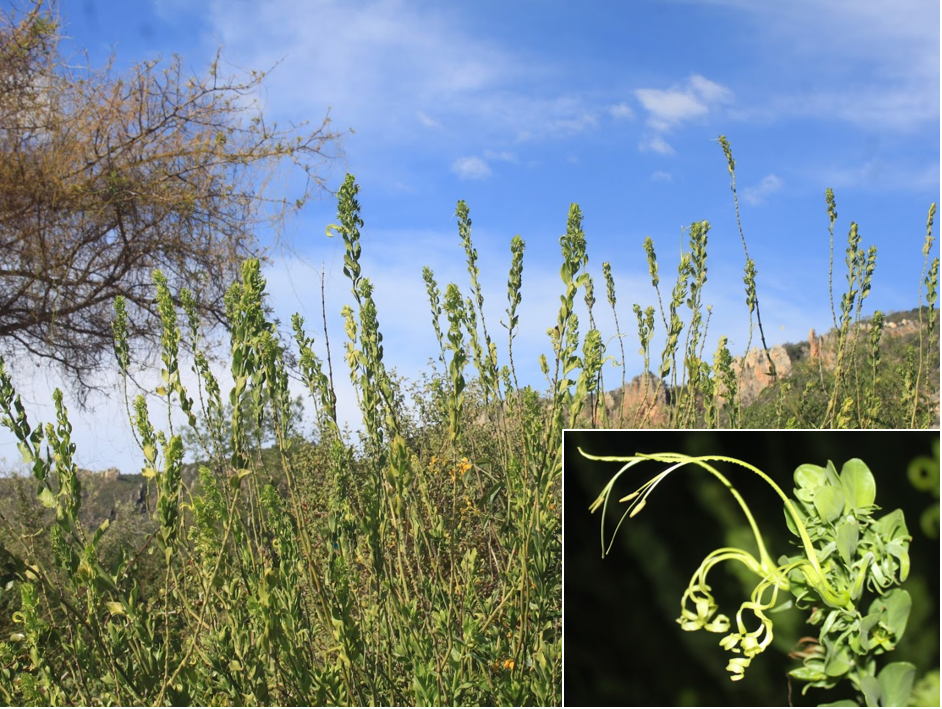 Bat-pollinated plants from the Caatinga typically display its flowers atop long stalks positioned above the vegetation as an advertisement to bats and to better interact with them, a floral organization known as styliflory. In the figure, the styliflorous bush Harpochilus nessianus (Acanthaceae), which was included in the research. Its flowers (inset), display typical chiropterophilous traits such as a greenish and inconspicuous coloration and large amount of nectar. Credit: Ugo M. Diniz.

Maybe because the typical shrubby vegetation found there, which is sometimes densely grouped, was an obstacle itself? Floral height had to have a biological meaning there. We went to investigate by collecting fruits set at different height and by counting visits from flowers along a height gradient from plants in the Caatinga and other environments to assess if there was any effect of height on flower fitness. Turns out taller flowers tend to yield more bat visits and fruits with more seeds after all, but not in all species. Only the shortest plants (herbs and short shrubs) showed this height-fitness relationship, indicating that the ground and surrounding plants could be, indeed, an obstacle to foraging bats, causing plants to shoot their flowers towards the heights. So, plants adapting to bat pollination seem to have to take things to the extreme. Tall flowers that are desperate to be noticed, large volumes of nectar, bursts of fragrance and even risking wasting part of its water supply to please the demanding bats. But it doesn’t end there. There have been some clues that bat-pollinated flowers even reflect ultra-violet light just like most bee-pollinated species. Perhaps to signal their location to bats, animals often mistakenly thought to be blind? A conclusive answer is still to come, and the future might bring some exciting insights about the cues involved in the interaction.

The truth is that everything is still very new. These findings are just the tip of the iceberg. Bat-pollination has always enticed scientists for its uniqueness, but only in the last few decades has the field gained adherence from a significant proportion of researchers. But the Caatinga, however a golden cradle for biodiversity, especially for chiropterophilous species, remains overall understudied in most of its aspects. We still can’t draw a precise picture of how the interaction between bats and plants work at the community and landscape levels there. Studies from the Federal University of Rio Grande do Norte state have shown, for the first time, how the network between bats and plants is structured in the Caatinga [7]. Recent works from POLINIZAR have also shown how bats share plants such as columnar cacti and bromeliads with other pollinators, including birds, hawkmoths, and even opossums [8, 9, 10]. On the landscape scale, it has been assessed that bats can promote pollen flow between plants atop rock outcrops whose populations are isolated from each other by several kilometers of semi-arid shrublands [11]. These findings are springboards for further studies that aim to take the interaction to wider scales of analysis. There is still much to be done. You can keep to date with new discoveries at ResearchGate (researchgate.net/profile/Ugo_Diniz2) and Twitter (twitter.com/umdiniz).

No doubt that the Caatinga is a national treasure and a fountain of future discoveries for bat biologists. The place shines differently under the moonlight, and the discreet beauty of night-blooming flowers calling for their swift and shadowy visitors is a wonder seen by few. Hopefully, more attention can be drawn to the biome shortly, so that more and more people see and care for this natural heritage. After all, the clock is ticking fast in the Caatinga. Chronic bushmeat exploitation, wood extraction for the subsistence of local communities, and the expansion of area clearings for livestock have removed, so far, about than half of the biome’s original cover [12]. What is left of it is highly fragmented and unexplored, with less than a quarter of it being sufficiently sampled, turning it one of the most threatened and conservation-voided of Brazil [13]. It is now or never to investigate and understand the Caatinga, to protect its richness of species and interactions before the elusive flower bats chasing after sugary rains are nowhere to be found.