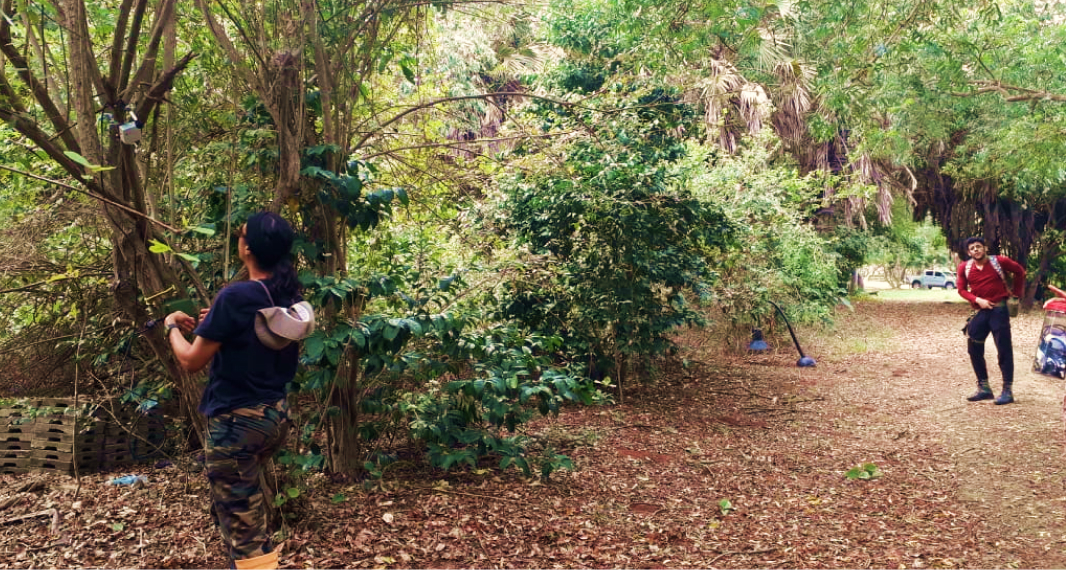 Monitoring the activity of insectivorous bats through acoustic surveys to answer ecological questions.

Last January, several young bat researchers from Africa and Latin America attended the First Bat Course on Ecology, Diversity, Conservation, and Ecosystem Services, hosted in Diani Beach, coastal of Kenya. As part of the course, we had to design group projects to develop our skills in techniques related to bat research and to answer a research question under the guidance of our professors. Getting a team together was easy as many participants were interested in working with a specific topic: bioacoustics. Our team had five members: Marilia Barros (Brazil), Karla Zaldaña (El Salvador), Bismark Opoku (Ghana), Lina Mushabati (Namibia), and me. Although everyone was eager to work with acoustics techniques, deciding on the research framework turned out to be harder than we expected. We had a few ideas on possible questions, so we decided to get some advice from Dr. Angelica Menchaca, one of the supervisors. After the consultation, we decided to use acoustics to answer the question: how does the activity of insectivorous compare between habitats?

Within our main study site, the Jacaranda Resort, we were able to identify three distinct habitats – forest areas, built areas, and open spaces – so we decided to compare bat activity in these three habitats since bats tend to be very selective in their foraging habitats. For such, we used SM4BAT full spectrum passive bat detectors from Wildlife Acoustics. These recorders are special because they can record high-frequency sounds such as the ones emitted by bats during echolocation. They can be scheduled to start recording automatically at sunset and stop recording at sunrise. We set one recorder per habitat, securing each detector and microphone at a height of 1.5 meters. We also needed a collection of reference calls to compare the obtained recordings with, and that is where cooperation with other groups came in. We ensured that all insectivorous bats captured were kept by the other groups after they finished their samplings so that we could release and record them. This allowed us to have a reference library that was organized, compiled, and processed as part of a separate acoustic project carried out by other participants.

Once our design was ready, we placed our recorders. In fact, at first, we put two SM4BAT-FS recorders in each habitat. However, when we took out the SD cards to check the recordings from the first night… surprise! We found out that the memories were full from recording the first six hours only, so imagine the amount of insectivorous bat activity on the coast of Kenya! Although the problem could be easily solved by placing two SD cards in each recorder, we, unfortunately, did not have enough of them. We, therefore, learned an important lesson about some of the necessary tradeoffs when conducting acoustic monitoring – do we want to record for longer, or record in more places? Hence, as a team, we decided the best approach was to use only one recorder per site, allowing us to place two memory cards in each recorder and record for 12 hours, covering a whole night of bat activity. 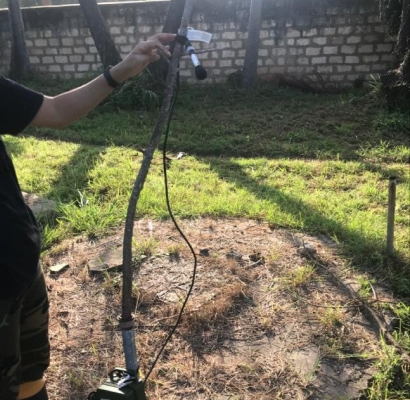 Setting up one of our recorders.

From a single night of recordings, we obtained 24,267 files to analyze – and we had just a couple of nights to do it, so we got down to work! We all analyzed the sound data on different computers simultaneously so we could make it on time. Thanks to the reference calls compiled by the other acoustics team, we were able to identify some species from our recordings. But as we expected, we had some echolocation calls that did not match the reference calls. Imagine being at 4 AM at the hotel’s conference room, stuck with a vast amount of files, and not able to identify the calls despite the pressing deadline to present the results. However, this situation is rather common when working with acoustics. It is not always possible to identify all the species from recordings as the method is inherently limited by the quality of the reference calls available for the region. So we embraced it as a team and overcame the challenge by identifying some calls to higher taxonomic levels like genera or families and leaving some calls as unidentified. 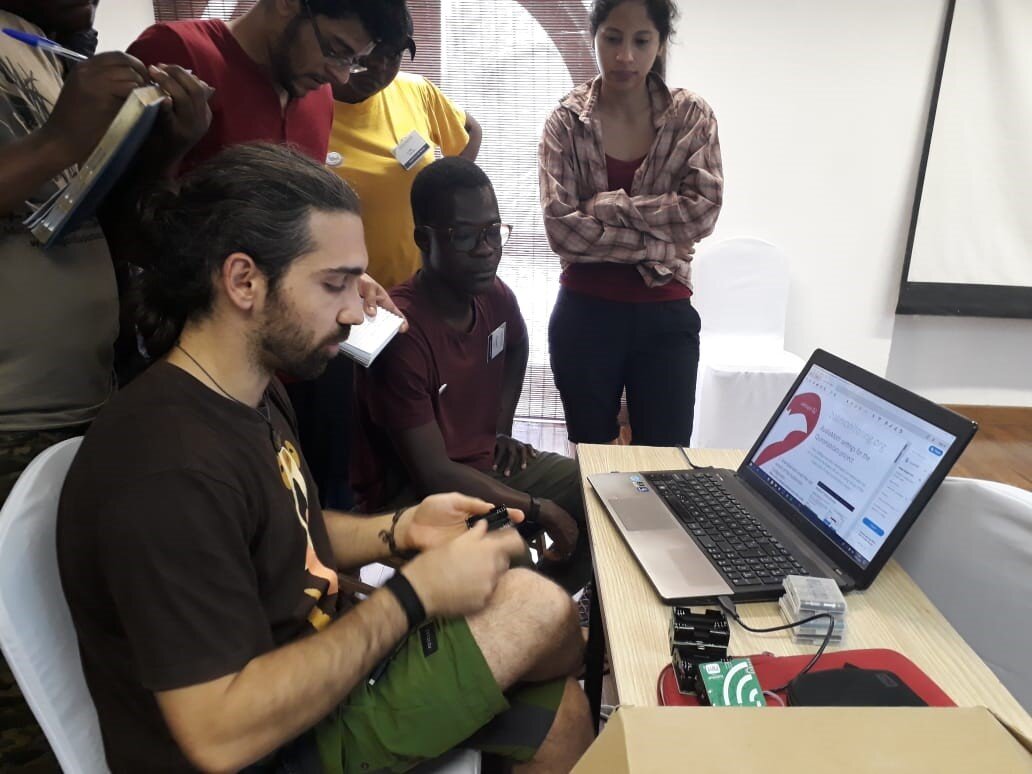 Dr. Adrià Lopez-Baucells mentored us through the processes of configuring the recorders and analyzing the data.

We also learned a lot about the time effort that is required for acoustic analysis, and how important it is to plan ahead of it. In the end, due to our tight schedule and amount of data, we were not able to analyze the activity from the entire 12 hours. Instead, we analyzed the activity for the first two hours after sunset because many studies have shown peaks of activity in these first few hours. And what we got was, indeed, still very exciting information, as we recorded a lot of activity from crepuscular insectivorous bats species. Dr. Adrià Lopez-Baucells, one of our supervisors, gave us a lot of useful tips on how to analyze the data in the right way. After some sleepless nights and endless amounts of coffee, we managed to analyze enough data for the project.

Our results were more interesting than we could have thought. We registered at least 15 different sonotypes, from which we were able to identify 6 to the species level, 5 to the family level and the rest remained as unidentified bat calls. The three sonotype (henceforth called “species”) groups with more activity were Coleura afra, Neoromicia rendalli, and Molossidae spp. Bat activity peaked between 19:15 and 20:00. When we checked for differences in overall bat activity between habitats, we found that bats were more active near buildings than in forest or open areas. However, when we analyzed at a species group level for each of the three most active species, we found that N. rendalli (Vespertilionidae) and C. afra (Emballonuridae) were more abundant in the forest. This was interesting because N. rendalli roosts mainly in banana leaves, which may be one explanation on why they are strongly associated with the forest. At the same time, Molossidae species were more active by far in building areas. That led us to think that perhaps these bats could have been roosting in the buildings, explaining their increased acoustic activity in this habitat.

It is fantastic to think that with only two hours of recording, we found a difference between the habitats we evaluated. Imagine what we could find if we dedicated more effort to analyzing the entire 12 hours. This is one of the incredible assets of using acoustic surveys to sample biodiversity: allowing us to answer ecological questions with species that, most of the time, are elusive and underrepresented when using regular capture methods.

Finally, it was the big day and we had to present what we found on the last night of the course in front of all colleagues and professors. It was a success! We presented our work and had an amazing time in the course learning new research skills and building new bonds that will last forever. Moreover, it was an extraordinary experience to strengthen research skills in acoustic monitoring. However, above all, it was enriching to work with all the new and diverse colleagues and to learn from them. For each challenge that came our way, we managed to find a solution (with a lot of help from Adriá, who guided us throughout), and that was possible because we had the same goal: to do our best to present a good project. So far, so good for sample number one of what can be accomplished with the Global South Network.