Are all bat wings the same? 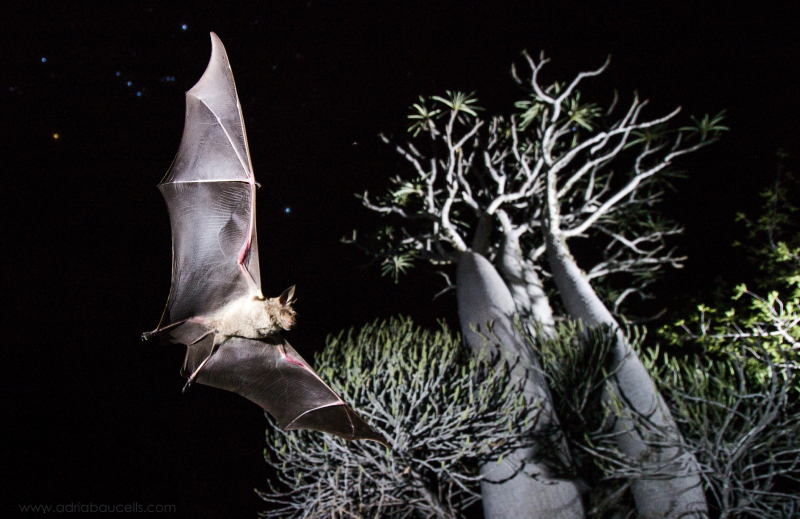 Learning more about the geometric morphometrics of bat wings. Could individual bats have unique wing shapes?

The technique of geometric morphometrics applied to bat biology to assess species divergence across different taxonomic levels and to infer differences in foraging performance and preferences. Here, we report our experience with the method during the first Global South Bats course in Kenya, 2020.

When we see bats, often the main characteristics to stand out are their face, size, and maybe colors; in fact, characterizing bats based on these conspicuous features could be very intuitive. However, have you ever wondered if bat wings are different from one another? Even if you had never thought about that, it sounds pretty intuitive. Someone could easily reach the logical conclusion that every species displays particular traits, thus the wing shape should also be different. But what about bats of the same species? Could individual bats have unique wing shapes? Could individual wing traits reflect the foraging performance of a bat?

Here is where the challenge arises: how can we accurately measure wing shapes? When trying to differentiate wings in terms of shape, one could get stuck if they are similar in terms of size and proportions. Recently, geometric morphometrics has risen as a way to tackle this issue. This methodology analyzes morphological shapes using coordinates instead of linear measurements1, allowing us to decipher patterns of shape divergence even between objects very similar to our eyes. For bat biologists, it offers, among several uses, a technique to quantify the shape of the wing, rather than the size, and provides useful information of a specific part of bat morphology.

Advised by Dr. Angélica Menchaca, we gathered a small research team that did a short field project to explore the use of geometric morphometrics to study wing morphology of bats found in Diani Beach, Kenya. We aimed to test how far the method can reach, evaluating its ability to differentiate between bats at different levels:

Now, a bit on the necessary details of the process. We captured bats using mist nets in the gardens of Jacaranda’s Hotel and Diani Bay Resort’s, and with hand nets in the Three Sisters Caves in Mombasa. Then, we identified the species and took pictures of the wing for each animal caught. The high-resolution photos were taken by positioning the bats’ wings over a graph paper (to provide scale) by gently stretching the right-wing until the elbow was fully extended as well as the feet. Next, using the open-access ImageJ software, we set up 13 landmarks on strategic anatomical points5 in each photograph. Photographs and landmarks always have to be standardized, so the distance of the camera to the wind was always kept constant. 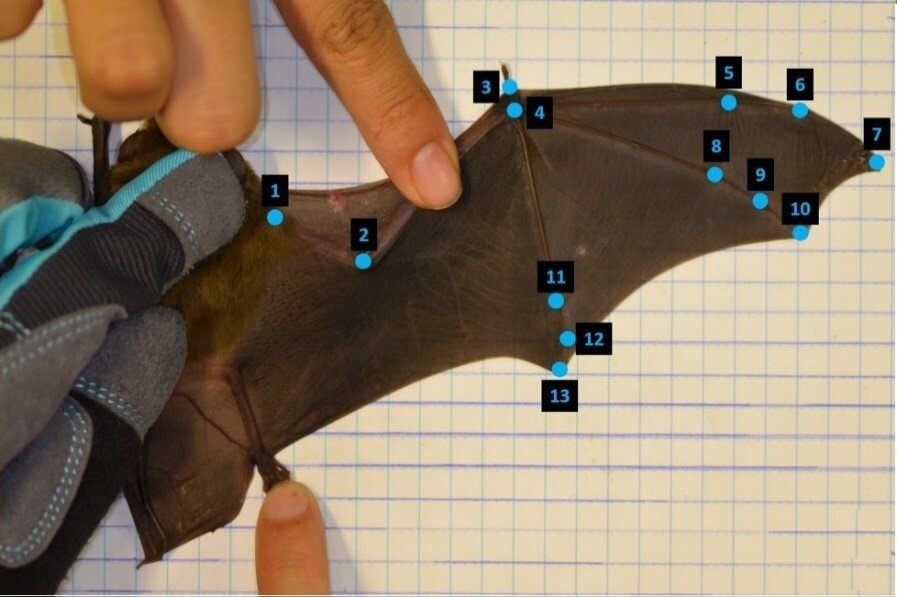 The right wing of a Scotophilus trujilloi (Vespertilionidae) stretched showing the location of the 13 landmarks. Photo: A. Ribadeneira

So what did we find?

We obtained exciting results that support the efficiency of the geo-morphometric approach. Clear discrimination was observed at the family and genus level. There is no overlap between the families Vespertilionidae and Rhinonycteridae, and within Vespertilionidae, the genera Scotophilus and Neoromicia are not overlapped.

Similarly, even with small sample sizes, both cases tested at the species level displayed differences in wing morphology. 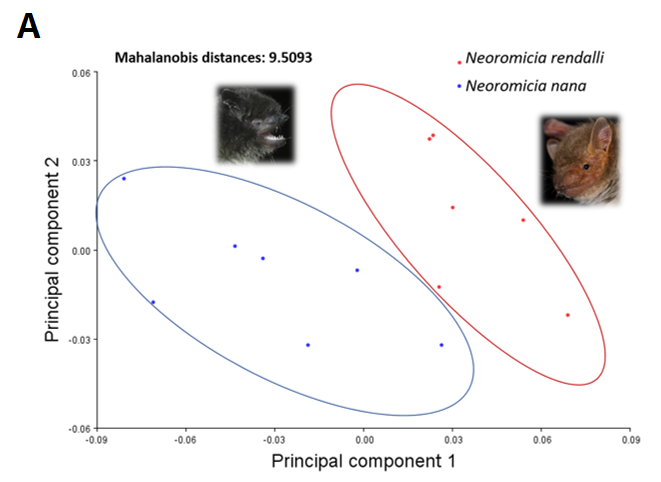 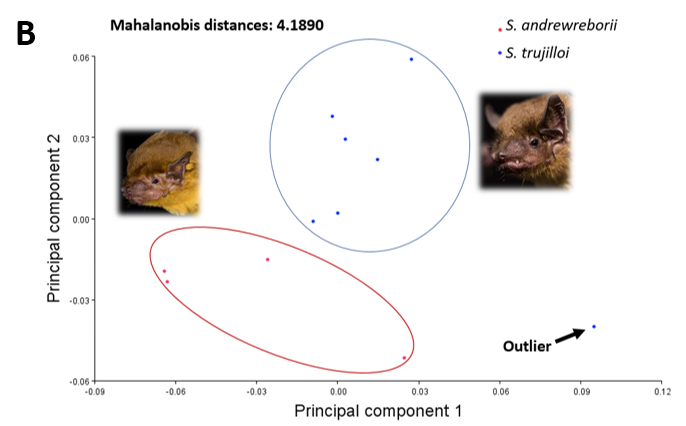 On the other hand, the analysis at the intraspecific level did not show a clear contrast between the wing morphology of the two Triaenops afer morphs, the orange and the gray/brown. 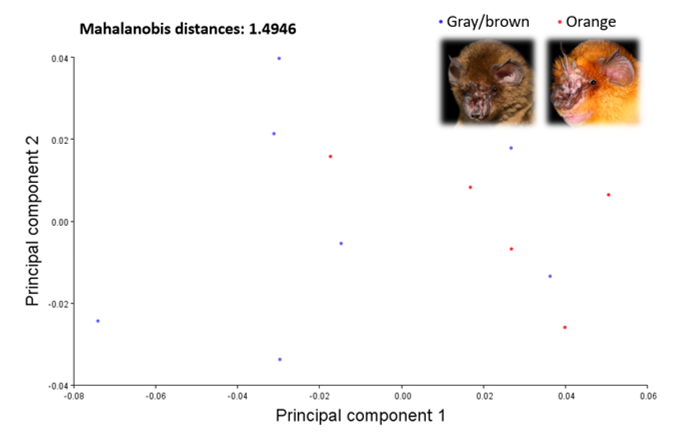 Well, this exploration is just the tip of the iceberg. Based on these results, many ecological studies may ensue. Wing shape is closely related to foraging strategies and feeding habits of bats6. A very recent study showed differences in diet-related to wing morphology in a neotropical bat species by combining geometric morphometric techniques with DNA metabarcoding of diet7. Furthermore, other behavioral traits, such as migratory activity, can be related to wing morphology8. Although this was only an exploratory study, our results of wing morphology show that the geo-morphometric approach is a versatile method that can potentially differentiate cryptic species of bats, revealing differences at even the species level, representing a promising tool to shed light on the ecology of bats. It is necessary to test similar questions in other intraspecific variation cases in order to accurately determine the scopes of this method.

Special thanks to the skull morphometrics team: Cecilia (Peru), Ana Gledis (Mozambique), Estefania (Mexico), and Sospeter (Kenya). Both our teams worked together to collect our data during the fieldwork.

Want to try this method? Here some experiences:

It was our first time using the method and working on this sort of topic. The process may seem like “just taking photos”. However, that is far from reality. First, setting up the system is a pretty complex job, as the tripod and the camera have to be arranged in a way that the framing includes the whole flatted wing in a perpendicular view, and the setting has to be standardized between different sampling occasions. Turns out bats aren’t always super still, especially some of the bigger bats that we worked with! Doing this procedure while withstanding bat and ant bites inside the hot guano-filled caves can be a little nightmarish. Furthermore, organization was key in this study, because we needed to be very careful to label the bags containing the bats, and systematically label the photos corresponding to each bat. Then, we had to place the landmarks correctly and consistently. This research was very challenging for us but, thanks to the advice of Dr. Angelica, we achieved our goal and learned how to carry out geometric morphometric studies. Despite the drawbacks, the work was very enjoyable. If you are looking for a good time learning something new and improving your research skills, accept the challenge, and go for it!