Bat Ectoparasites in Kenya: the importance of creativity and improvisation 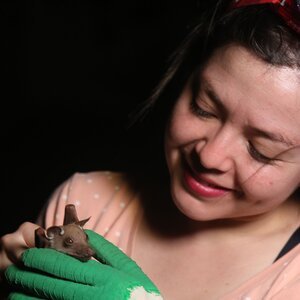 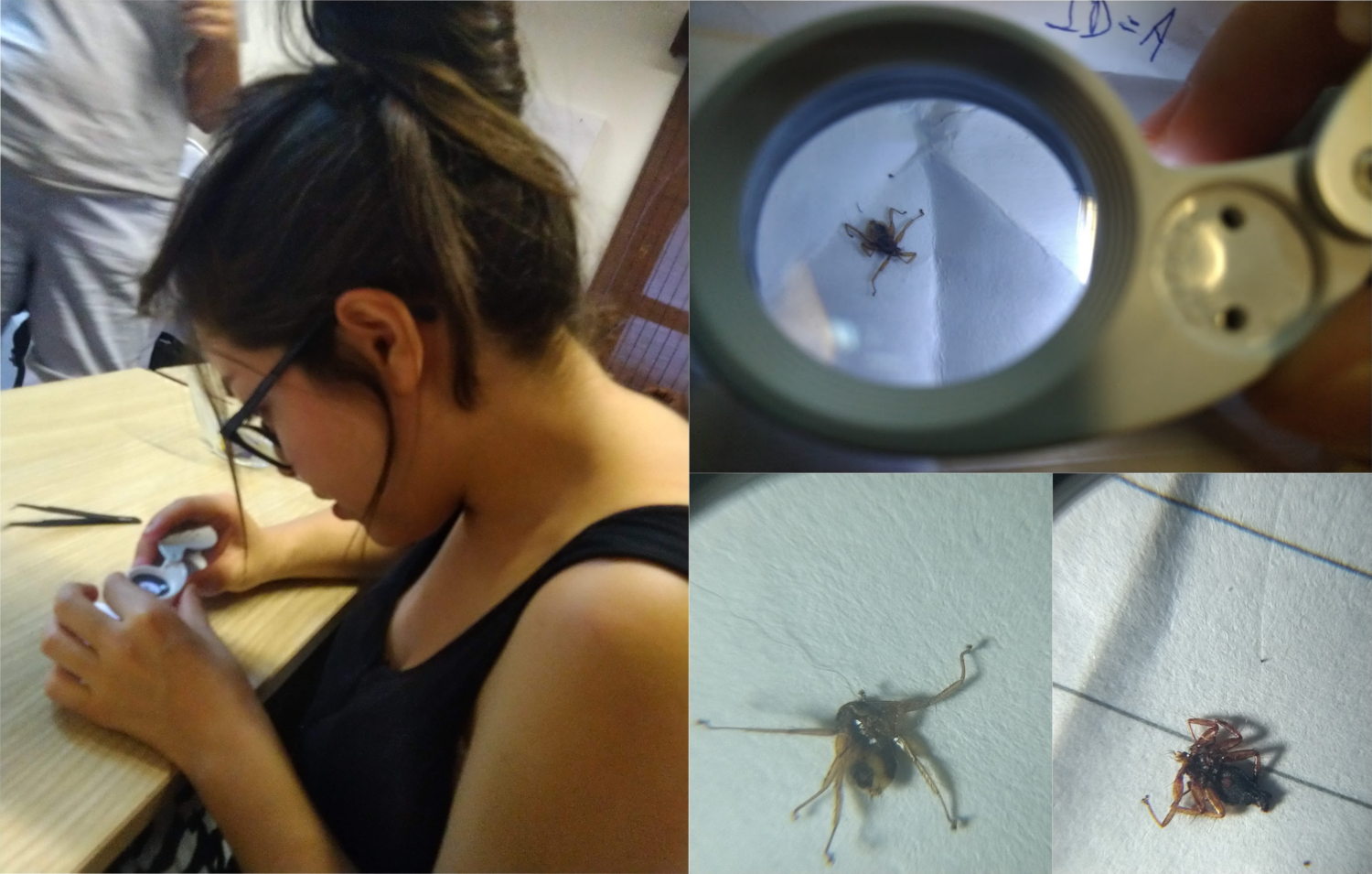 Our group project work was demanding and fun at the same time, and we were tested on one of the most required skills that scientists need in their work: creativity.

In January 2020, I had the fantastic opportunity to travel to Kenya to participate in the First Bat Course on Ecology, Diversity, Conservation, and Ecosystem Services. The goal was to bring together people from Africa and Latin America to join efforts between developing countries of two continents that possess so much of the world’s bat diversity. During this course, we had all kinds of different activities per day, which included lectures from some of the most renowned bat scientists and fieldwork at night. We caught so many cool bats that I had never seen before, including my first flying foxes! It was such a great reminder of how much I love working in the field of bat research.

One of the most fun and challenging part of the training was the task to carry out a group project within a short week of training. My group (Ugo Diniz, Fabrice Gnali, Abidemi Raji, and I) decided to work on a research project titled “Drivers of Ectoparasite diversity and abundance in Paleotropical bats”. Our curiosity and interest to work with ectoparasites present in bats were sparked after we observed that some of the small bat species we caught, mainly the Neoromicia (Vespertilionidae) in our first mist netting nights, were full of large parasites. Ectoparasites are usually known as vectors of pathogens and are present on almost all species of mammals, including bats. The diversity of ectoparasites present in different bat species may depend on the ecology and behavior of both the bat and the parasite. For instance, bat roosting dynamics may affect ectoparasite diversity and abundance in bat species. At the same time, these ectoparasites may also change the bat’s fitness. Many ectoparasites are present on their hosts all year round whereas others are only present during different reproductive stages of the host’s such as gestation or lactation. Some of the parasites that we found on the bats that we caught looked like tiny moths and others like small black dots. These observations made us question whether closely related bat species are hosts to similar ectoparasite species, and also if body size and sex were related to ectoparasite abundance and diversity. As we were going to visit some caves, we also wondered if different roosting habits influence the ectoparasite diversity on bats.

We worked with bats caught at two different habitats. The first one was the gardens of our lecturers’ hotel and our own hotel; Diani Bay Resort and Jacaranda Resort respectively– which, by the way, was an incredible place in front of the beautiful Diani Beach in Mombasa – and the second one, was the Three Sisters cave in Mzizima, Kwale County, which is a majestic site with thousands of Rousettus aegyptiacus and safari ants that attacked a few of us. The cave amazed each one of us in different ways.

I had never seen a fruit bat before, let alone thousands of them; and Fabrice had never seen a bat carrying its own pup! Working inside of the cave was an adventure in itself. Not only were we attacked by ants, but also some others were attacked by bees. Walking inside of the cave was a unique experience as you can really feel the air currents around your head caused by the flapping of thousands of bat wings, and the floor felt as if you were walking on a soft mattress that was actually a bed of guano (bat poop). With my group, we decided to handle our bats outside of the cave, as the ants started crawling up our legs as soon as we would stand still. And what a good decision that was. Trying to catch extremely fast parasites from bats is already a difficult task, imagine how it would be if you are also being stung by different insects at the same time. 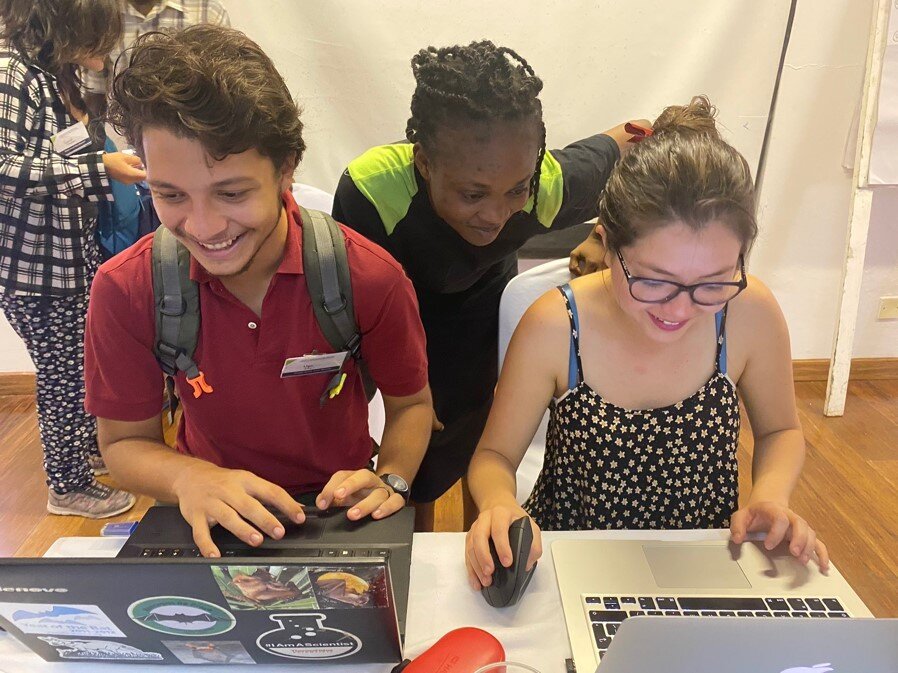 Racing against the clock to analyze and discuss our ectoparasite data alongside Ugo (left) and Raji (center). Fabrice was likely nearby sorting out the parasites.

We began our study by collecting parasites from all the bats that we could catch. Our work had to be done in coordination with the other teams so that each team collected the data they were interested in. We examined each bat thoroughly for parasites, we carefully opened their wings, checked behind their ears, back, head, and tail. If we found something interesting, we carefully plucked it out with a pair of tweezers. We quickly learned that you have to develop certain skills to quickly catch the parasites as some flew away or crawled into the bat’s fur. Although we finally collected enough parasites to analyze, and the bats were professionally groomed, we realized that parasite catching is more challenging than anticipated!

After sampling the parasites, we faced the challenging task of identifying the different species. Ideally, we would have used a microscope to look at them closely and find the main features of each parasite, but we had to rely on basic magnifier glasses. We were able to tell them apart by the differences in morphology and could classify them into the family level. We found bat flies and ticks. There exist only two bat fly families that can be differentiated by the presence or absence of wings. The winged bat flies belong to the Streblidae family, and the wingless ones, to the Nycteribiidae family. Because we did not have a key for identifying bat parasites, reaching the family level would do. We received additional help from one of our great instructors (Julius Nziza) to classify the ticks. We found that parasite diversity is more similar in related bat species and that there is no difference between females and males. We also found out that certain parasites do not seem to discriminate between bats that roost in caves and bats that roost in trees. And that some species of bats can be hosts for a very diverse number of parasites, while others have more exclusive passengers. 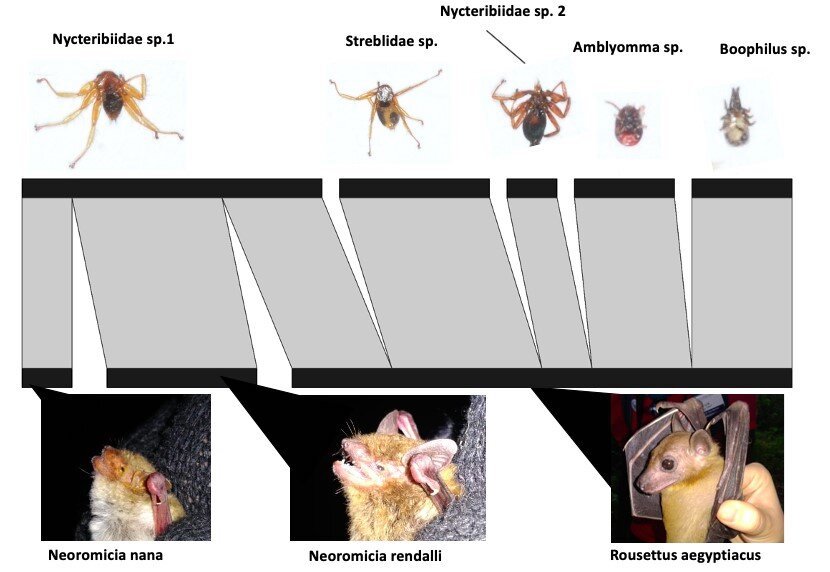 An interaction network of the bats that we caught in Mombasa and their ectoparasites. The cave-dwelling bat Rousettus aegyptiacus was carried the most parasites among all studied species.

Our group project work was demanding and fun at the same time, and we were tested on one of the most required skills that scientists need in their work: creativity. Since we did not have the majority of the materials that are typically used to collect ectoparasite samples; we had to rely on our creativity to solve a problem without jeopardizing the results that you would obtain with more traditional collection techniques and methods. For instance, as we did not have vials, we made our own paper envelopes to keep the parasites separated! But we also had to use vodka instead of alcohol to prepare the samples, thus depleting our party resources.

The project reminded us of the challenges that come with doing research and fieldwork in the tropics. Things never work as planned, and you have to be able to improvise with the resources that are available. But if you dare to think out of the box and work towards a solution, you will learn to stop worrying and realize that creativity and imagination are two of Science’s best friends. Thinking outside the box is the hallmark of innovation!